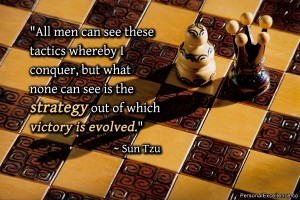 In our introduction piece to hashtags, #History, we discussed the origin, evolution, and common uses of the hashtag in social media. Now, we will be delving into the strategy and research needed to see marketing success with your hashtag campaigns.

There is no denying that hashtags can be an incredibly powerful marketing tool. They have a reach and viral potential unlike almost anything else, but no one has yet discovered a sure fire way to harness the hashtag.

Another very real concern with hashtags is having them backfire; this is an all too common event for brands venturing into the wild west of viral marketing. But with some forethought and strategizing on the crafting and deployment of your hashtags you can maximize their potential for success. With that in mind, let’s look at some best practices for crafting your hashtags to get the most out of them.

Match Your Hashtags To Your Goals

Once you have identified the goal of your hashtag campaign, you want to choose the most succinct and relevant words for your hashtag possible. Too short and your hashtag may be too broad, too long and it can be too specific and/or difficult to retype. You’ll want to choose words or a short phrase that speak to your goal. You can use your brand or slogan if your goal is branding, such as Coca Cola’s #ShareACoke campaign. Use a call to action if you’re trying to engage your audience and encouraging them to take some kind of action (register, like, repost, etc.) such as with Red Bull’s #PutACanOnIt picture sharing campaign.

If there is one practice that is more important than any other when it comes to hashtags, it is to do your research. See if the hashtag you have in mind is already in use or if there is a similar one in use. Search for hashtags similar to yours, and see how they are being used. If there’s a hashtag campaign being run by another brand that is similar to what you have in mind, see how it was received. This prevents you from using a hashtag or hashtag phrase that already has an association with another brand or concept, and minimizes the chance of your hashtag backfiring.

How can a hashtag backfire if not properly researched? There are three common situations that lead to this: choosing a hashtag that is viral or already has an association without first finding out what its meaning and relevance is, not considering other meanings and readings of your hashtag, and not considering the potential for abusing a hashtag by internet users. The internet is littered with examples of all three missteps, so let’s take a look at some of the most egregious hashtag #FAILs:

Timing is another key pillar of successful hashtag deployment and also one of the hardest elements to quantify and judge. Viral trends happen at (literally) the speed of light these days, with a single tweet or post able to trigger a global trend in hours or even minutes. The practice of harnessing a viral meme or news item by making your brand or company part of the conversation is called newsjacking, and doing so can allow you to direct some of the visibility being generated by said meme or news item to your brand.

Sometimes viral memes and their hashtags occur organically. Other times they are centered around a particular event or news item, whether an award show, championship game, or national controversy. For events that are planned in advance, such as the Superbowl, you can have a strategy already in place to direct some of the attention going to the event toward your brand.

When dealing with spur of the moment trends and events, the key is to make sure that you first do your research and understand the context of the trend (see DiGiorno above for how not to do that) and to be sure your brand has something relevant to add to the conversation centered around the event or hashtag (again, see the DiGiorno example for what failing at that looks like).

A great example of this that speaks to both spontaneous and planned viral hashtag campaigns is when the SCOTUS ruled last June that marriage equality is the law of the land. Beaucoup brands made posts supporting the ruling using #LoveIsLove and #LoveWins, not only adding their voices too and engaging in a vibrant national and global dialog, but also gaining some of the visibility garnered by the hashtags; #LoveWins alone netted more than 4.5 billion impressions!

Here are some of our favorite examples: 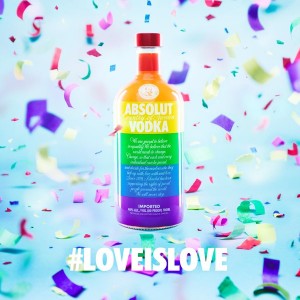 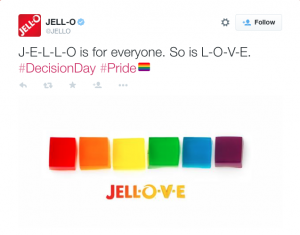 By following these simple but essential principles of Goal, Research and Timing, you can setup your hashtag campaigns to have the best potential for success while also minimizing the chances of any of them having a costly #FAIL.