Mobile video viewers consume video differently from desktop viewers. They’re often on the go, looking for one specific piece of information, or distracted by outside influences just beyond their 4-inch screen. Because of these differences, you should create mobile videos considering these five important factors.

Mobile users are on the go, often using their phones to watch a how-to video as they fix their car or put on makeup. A mobile video can serve a utilitarian purpose, helping someone complete a specific task. If you’re creating a how-to video, don’t waste the viewer’s time with a long intro; instead, get to the point and tell the viewers exactly what they need to know.

The smaller screen of mobile video should affect your approach for shooting and editing. If you’re adding text on the screen, make sure the text is large enough to be legible. Each shot should also be framed so that important subjects are visible, even on a 4-inch screen.  Use close-up shots when necessary so that the viewer can catch all the crucial details.

Audio May Be Turned Off

Viewers often watch videos without audio, at least until they’re captivated enough to turn it on. Viewers are watching videos in public where they don’t want to disturb others, and they’re watching videos in apps like Facebook that auto-mute videos until a user clicks. To adapt to this, consider adding captions or descriptive text on your videos. Facebook recently reported that video ads that include captions have an increased video view time of about 12%. You don’t need to subtitle every spoken word in the video, but consider adding captions that explain what the visuals alone do not communicate.

Long videos have their place, and they can work on mobile. Even so, if you want a viewer to watch your entire video, a shorter video is more likely to accomplish that. Remember that viewers are watching these in real-world scenarios, as they walk down the sidewalk or as they stand in the breakroom waiting for the coffee machine, so there are plenty of distractions and time limitations in those environments. A long video is less likely to be watched entirely. From a marketing perspective, if you’d like to make sure a viewer sees every part of your message, keep your video short and engaging so that a viewer reaches the end of the video, when your call to action drives the user to take an action.

Phones Can Struggle with Large Files

Make sure your videos are watchable on a mobile device. For one, use a video transcoding software program like Handbrake to compress your videos. This will help your video to load quicker even if the viewer isn’t connected to Wi-Fi. Also consider using a platform like YouTube that automatically adjusts bitrates based on the user’s connection. These considerations can improve the likelihood that your video is watched all the way through. 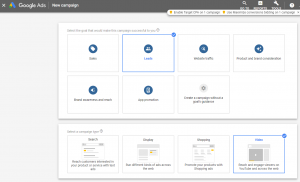 How to Create a Google Video Ad

What is a Google Video Ad?

What Is Integrated Marketing?